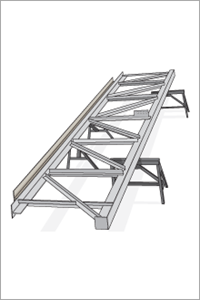 Incident summary
A young and new worker was using an angle grinder to cut tack welds that were temporarily securing a support beam (strongback) to a steel truss. The truss and the attached strongback were placed on sawhorses, and the worker was cutting the tack welds from underneath. When the worker cut the 5th of 10 tack welds, the strongback separated from the truss. Both the strongback and the truss fell on the worker, who sustained serious injuries.