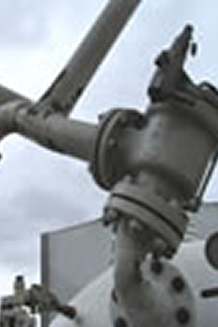 At the site of an inactive gas well, two workers were flowing the high-pressure gas from the well to determine production potential. They were inside an operator's shack when a pipe ruptured, and the escaping flammable gas exploded in a fireball. Although the two workers were wearing fire-retardant clothing, they suffered burns. The smaller piping downstream from a pressure relief valve (PRV) was one of the factors that caused the piping system to fail.