Worker struck as utility pole is lifted onto truck 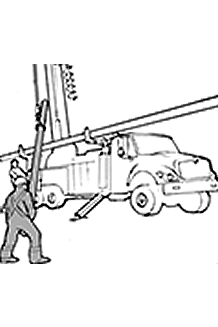 Incident summary
In the works yard, two workers were loading two wooden utility poles onto a digger derrick (a truck that installs utility poles). The rigger was assisting the operator by placing tongs around each pole and navigating the poles into the pole bunk. The workers lifted the first pole onto the digger derrick. The second pole was not level as it was lifted, and the rigger was manually holding the tapered end to navigate the pole into place. The pole hit the bunk stake and shook violently. The tongs released the pole, which then struck the rigger, causing serious injuries.