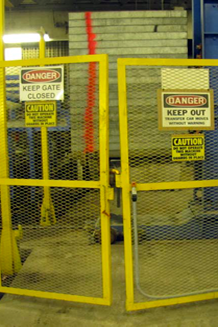 Incident summary
During the process of de-stacking cured concrete patio slabs at a manufacturing plant, an alarm indicated an alignment problem with the stacked trays. To fix the problem, a worker walked through an alarmed gate into the fenced area where the de-stacker was located. He made the necessary adjustment to align a component of a tray, but before he could leave the area, he was struck by an automated forklift - also known as a finger car - as it delivered a stack of concrete slabs to the de-stacker from the kiln area. The worker suffered serious crushing injuries.