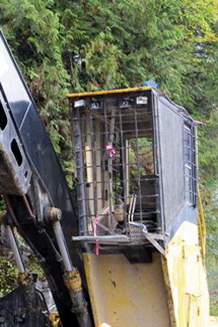 A load of logs got hung up on the ramp at a log dump. A tracked log loader with a grapple was being used to get the logs into the water. The loader operator commented that the cab felt loose, but he continued to use it. A number of times he abruptly placed the grapple on the ground and then repositioned the tracks to the loader. In the last attempt, the cab broke free from the frame and hinged forward, striking the ground. The worker was not restrained and suffered serious injuries.