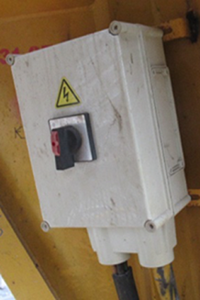 Incident summary
At a highrise apartment building construction site, a crane operator accessed an electrical crane control cabinet located in the operator’s cab of the crane. He touched and wiggled a wire that looked out of place. An arc flash occurred, causing several electrical components within the control cabinet and the worker’s jacket and pants to catch fire. The worker removed himself from the cab, took off his jacket, and used his hands to extinguish flames on his pant leg. He then climbed down the crane mast ladder to the ground below. The worker sustained serious injuries.