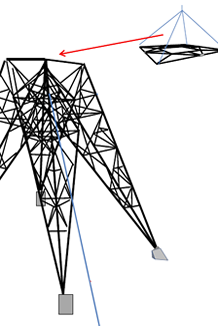 Incident summary
A crew was in the process of erecting a hydro tower for a high-voltage power line. One of the workers, a power line technician, took his place on top of a tower leg, preparing to receive a "rack" that would join the tower's four legs. A crane was positioning the rack when a guyline that was supporting the leg broke, and the leg collapsed. When the leg struck the ground, the worker was thrown off the leg. But then his fall protection equipment caused him to bounce back and strike the leg. He sustained serious injuries.