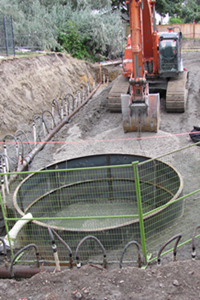 Incident summary
As part of an upgrade to a sewer treatment plant, workers were constructing a lift station (a large underground cylindrical structure to move wastewater from lower to higher elevations). The excavator contractor was using a dewatering and shoring method that involved an open steel caisson driven into the soil as a barrier to prevent groundwater and soil from entering into the sides of the excavation. Crushed stone was placed around the outside perimeter of the caisson. A worker standing on the crushed stone was pulled down and trapped in the ground when a quicksand condition developed under his feet. The worker was rescued by his supervisor and co-workers. He sustained injuries.