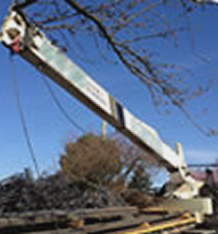 Several days before the incident, a hydraulic lift cylinder on a truck-mounted crane started to leak oil. The cylinder was removed and taken to another company for repairs. After the crane had been returned to service, the operator was at the controls and was lifting the boom up from the stowed position. He was not looking at the boom angle. The operator heard a bang and looked up to see that the main hydraulic lift cylinder had released from the cylinder barrel, and then the boom fell over backwards towards the truck deck.

As the crane's boom fell, it narrowly missed hitting a worker who was standing on the right side of the trailer deck. The worker jumped from the deck to prevent being struck as the boom fell over. He did not sustain any injuries.