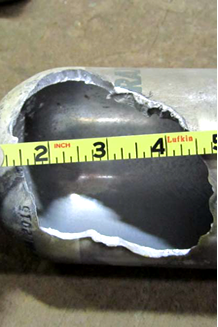 Incident summary
A worker was moving two full medical-grade oxygen cylinders to place them in a storage rack. One of these aluminum cylinders knocked against a freestanding cylinder on the ground, which then exploded. The regulator and valve assembly separated from the cylinder body, and part of the side wall near the top of the cylinder ruptured, injuring the worker.