Worker injured in fall from ladder 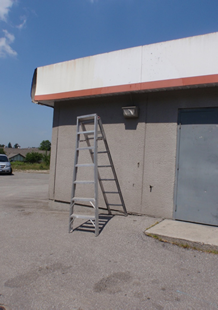 Incident summary
A worker was standing on an aluminum stepladder using a manually operated sprayer to apply a cleaning agent to an exterior building awning. The ladder became unstable, and the worker fell onto the pavement, striking his head and sustaining a serious injury.