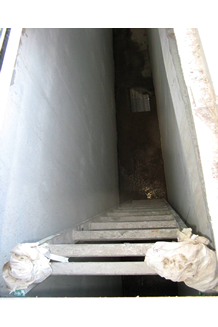 Incident summary
The jobsite was a concrete highrise building under construction. Two workers were cleaning out debris in an air vent shaft approximately 10 feet (3 metres) below grade. The horizontal shaft was about 168 feet (51 metres) long and was unlit. Access was via a 10‑foot aluminum ladder. One worker, who was working about halfway down the length of the shaft, walked off the edge of the horizontal shaft and into an unguarded vertical air shaft. The worker fell approximately 30 feet (9 metres), landing on the concrete below. The worker sustained fatal injuries.