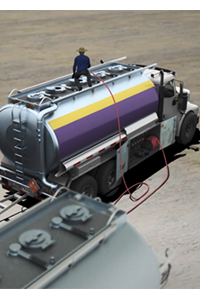 Incident summary
A worker was standing on top of a tanker truck to transfer gasoline from a tanker trailer to the tanker truck. The tanker truck’s engine was running, and the pumping system was engaged. The worker opened an access hole cover to a compartment in the truck that held diesel, and another to a compartment that was empty. Some diesel remained in the hose (mounted on a reel in a cabinet on the side of the truck) because the worker had used the hose and nozzle to pump diesel earlier that day. The worker pumped gasoline from the tanker trailer and used the gasoline to push the remaining diesel from the hose into the truck’s diesel compartment. Once all the diesel had been displaced from the hose, he moved the nozzle to the empty compartment to complete the transfer of gasoline. Soon after the worker started pumping gasoline into the compartment, an explosion occurred on the tanker truck. Liquid gasoline then spilled from the hose and nozzle onto the side of the truck and to the ground below. The spilled gasoline ignited and burned. The worker fell off the truck and was engulfed in the ground fire. He was seriously injured and did not survive.