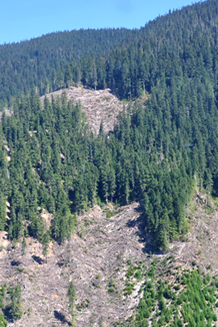 Incident summary
A certified faller was on a steep slope, using his chainsaw to buck a felled tree into logs. Another faller was working upslope and felled a tree, which ran away downslope following a natural drainage path. The faller who was bucking was struck and pushed downslope by either the runaway tree or a rock or other object that was dislodged by the runaway tree. When this faller did not answer a regular radio check, his falling partner went to check on him. The falling partner found the faller unconscious and seriously injured.

The injured faller and a first aid attendant were flown off the mountainside to a log landing to meet BC Ambulance Service paramedics who were on their way by helicopter. When the paramedics arrived at the log landing, they determined that the faller was deceased and could not be resuscitated.