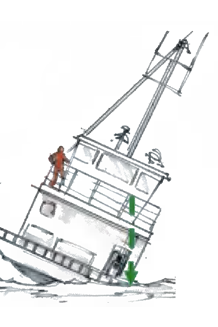 Incident summary
After servicing fish farms, a landing craft was travelling overnight to a port for scheduled maintenance. Not far from their destination, the vessel started taking on water and the deck became covered with a significant amount of water. The vessel started listing to one side and then capsized. One crew member managed to escape before it capsized and he was picked up by a rescue boat. The vessel quickly sank after capsizing, and the other two crew members were trapped aboard and died.