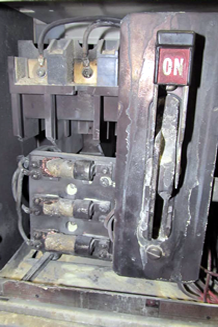 Incident summary
In a lumber mill, a maintenance worker was troubleshooting an electrical motor that had stopped working. The motor was rated for 575 volts. The worker shut off power to test three fuses. The fuses were functioning, but the motor still did not start when the power was turned back on. While the worker was standing beside an open compartment in an energized motor control centre, his screwdriver inadvertently made contact with the energized fuses and the bottom edge of the compartment frame. This contact resulted in an electric arc flash. The worker suffered arc flash burns to one side of his upper body. Another worker who was 15 feet (4.6 metres) away was temporarily blinded by the flash.