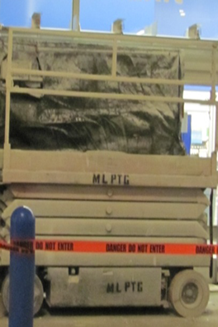 The painter's co-worker could not locate the emergency stop button because the mushroom-shaped cap identifying this control was missing. The painter was unable to disentangle himself before he was pinned between the guardrail and the ceiling. He died of his injuries.