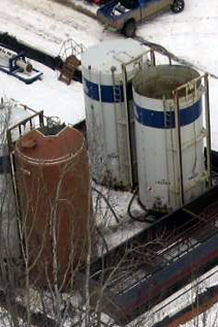 Incident summary
Workers were rinsing out 400-barrel storage tanks at a worksite. One of the tanks still contained flowback fluid, which is a waste product from the drilling of a natural gas well and contains combustible material. After a tank truck removed the flowback fluid, two workers from a heavy-equipment firm removed the door from the tank. Then another employer's crew rinsed the inside of the tank with warm water.

After the tank had been rinsed, the first two workers approached the tank to remove ice buildup at the doorway. The workers lit a propane torch, called a tiger torch. When the torch was lit, it caused the combustible material inside the storage tank to ignite, causing an explosion in the tank. The tank top blew off. Three workers were injured.