No injuries in explosions at pellet mill 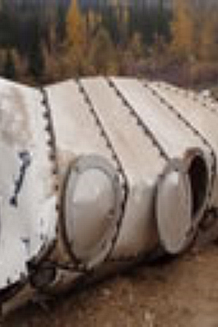 Incident summary
A pellet mill operator, working in the mill's control room, noted a high amperage reading coming from the motor of an auger that moved dry wood materials from a hammermill plenum. The motor was located directly above the enclosed plenum auger. A millwright discovered that the mounting bolts on the motor were loose and needed to be replaced. The shift supervisor approved the hot work to remove the old bolts, and the millwright completed the task using a cutting torch. Approximately 20 minutes later, there was an explosion in the hammermill plenum. Seconds after the first explosion, a dry product silo outside the building exploded. A large portion of the silo's roof was blown off in sections. There were no injuries from either explosion.