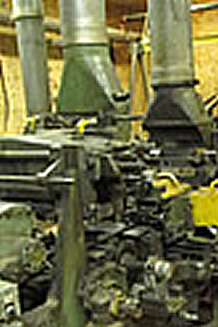 The planer infeed operator, at a different location, started the planer infeed, and lumber began to feed automatically into the top blanker. As lumber came out of the top blanker onto the infeed table, it struck the worker's foot, forcing it into the planer's infeed rolls. Although another worker in the planer room activated the emergency stop, the maintenance worker sustained serious injuries.