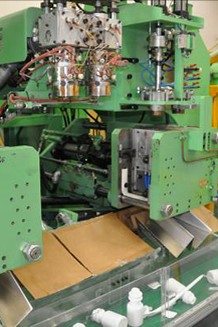 Incident summary
A maintenance worker was lubricating a twin-head blow-moulding machine that moulds plastic bottles. Two die plates were cycling back and forth one at a time from each side of the machine to the middle, where the plastic is extruded. The worker lubricated the slider shafts with a spray lubricant by reaching between the die plates as they cycled back and forth. The worker was caught between the moving die plates of the machine and sustained crush injuries to his upper body.