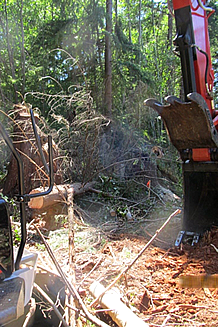 Several trees were being felled on a residential building site. The hemlock being felled at the time of the incident was growing out of an old tree stump 4 to 5 feet (about 1.4 metres) above the ground. An arborist cut a step in the side of the old stump to reach the hemlock he was falling. Another worker used an excavator bucket to touch the hemlock to provide directional control as the arborist cut the undercut and backcut. The hemlock began to fall. As it fell, it brushed a nearby tree. The butt of the falling tree came off the stump and kicked backward, striking the arborist. The arborist succumbed to his injuries in hospital.