Faller dies when struck by large slab of dangerous tree 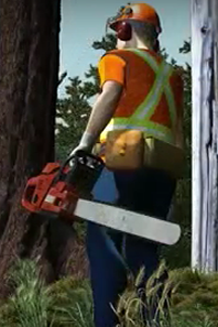 Incident summary
A faller was trying to overcome a falling difficulty by himself. He made cuts and placed wedges in three green trees so that he could use two of them to push over the third. The third tree was limb-tied with a nearby dead dangerous tree. (A dangerous tree -- as defined by the provincial Occupational Health and Safety Regulation -- poses a hazard to a worker for any one of several circumstances or conditions, including physical damage.) The trees began to fall in succession. As the third tree fell, its branches caused a large slab to break off the nearby dangerous tree. The slab struck the faller, causing fatal injuries.