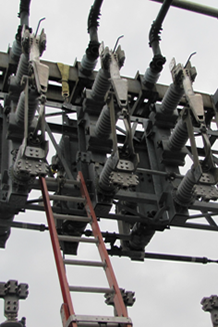 Incident summary
An electrician was working from a ladder, installing linkages onto a set of three circuit breakers in a substation. After completing the task, he attempted to remove his temporary fall protection anchor strap from the steel beam where he had placed it. In the process, he lost his balance and instinctively reached out and grabbed an energized 12 kV (high-voltage) busbar. He received an electrical shock, lost consciousness, and fell from the ladder into his fall protection harness. He was seriously injured.