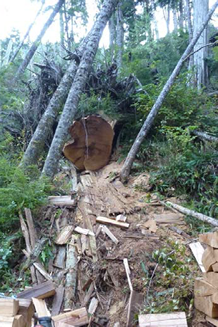 Incident summary
A worker was cutting a blown-down cedar tree into shake blocks in an area of old-growth timber with a steep slope. The cedar tree he was bucking was lying on the root base of a standing green hemlock tree. As the worker cut blocks off the fallen cedar, the weight on the hemlock's root base decreased, causing the hemlock to fall. This caused a chain reaction of falling trees, one of which struck the worker, causing fatal injuries.