Barge rolled side to side with unstable load 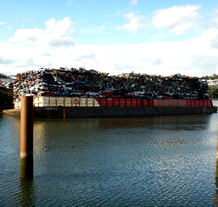 Incident summary
At a scrap metal recycling facility, a barge was being loaded with scrap metal and crushed cars for transportation to another of the firm's facilities. One worker was operating an excavator on the barge to position the scrap metal, and another was operating a loader on the dock. It was noted that the barge had a list to port of more than 4 feet (1.2 metres), meaning that the starboard (right) side was 4 feet higher than the port (left) side. When the loading process was nearing completion, the barge suddenly listed heavily to the port side, and about 100 cars fell off into the harbour waters. The barge then listed heavily back to the starboard side. The excavator operator was able to evacuate the machine and get off the barge without injury, although cars and metal were falling around him as he escaped.