Radon is an invisible, odourless, tasteless, radioactive gas formed by the disintegration of uranium in the soil. Long-term exposure to radon gas is believed to be the second-highest cause of lung cancer after smoking. Radon has the potential to accumulate in structures below ground where uranium is present in the surrounding soil and rock.

How workers are exposed

Radon exists everywhere but usually at very low and non-hazardous levels. Radon only becomes a problem when a building is constructed on top of soil and/or rocks rich in uranium, or if workers spend an extended time underground (e.g., in caves or excavations.) As the uranium decays it turns into radium, which then decays into radon gas. Small amounts of radon gas may leach through soil and floors and enter the building.

Radon gas accumulates in poorly ventilated areas and almost always below ground level. Because of the location and lack of ventilation, basements and cellars are the most common rooms for radon gas to settle in.

Beyond business establishments and residential homes, daycares and schools often have rooms partially or fully below ground level that may contain radon gas.

The dangers to workers

Radon has been recognized as a significant lung cancer risk to workers in underground mining. Growing interest in protecting members of the public in residential facilities from radon is also leading to concerns over the exposure of workers in workplace settings.

Radon levels in B.C. workplaces are generally not high enough to exceed the maximum safe dose, but some workplaces in radon-prone areas of the province have moderately elevated levels — enough to raise concern.

How to reduce the risks

Businesses in areas known to have radon and with rooms partially or fully below ground level should investigate the conditions. Individuals can also research to see if there is a risk of radon gas in their area.

Businesses who think their establishment is built on uranium-rich soil can have their premises tested. Radon measuring kits can be bought online or in hardware stores.

If radon gas is present, the best option is to hire a qualified professional to mitigate it. By controlling migration of radon gas from the soil into the premises by increasing ventilation and sealing gaps in walls and floors, the risk of exposure can be significantly reduced. 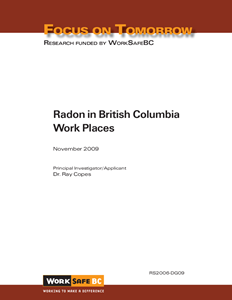 This research investigated the health risk to workers from radon in selected B.C. workplaces. The information gained will be used to develop a full research proposal aimed to formulate guidance for...