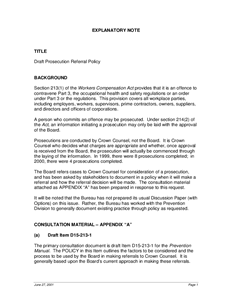 Section 213(1) of the Workers Compensation Act provided that it was an offence to contravene Part 3 (Occupational Health and Safety) of the Act, the occupational health and safety regulations or an order under Part 3 of the Act or the regulations. This provision covered all workplace parties, including employers, workers, supervisors, prime contractors, owners, suppliers, and directors and officers of corporations. A person who committed an offence could be prosecuted.

The Board refers some cases involving OHS violations to Crown Counsel for consideration of a prosecution. However, it is Crown Counsel who decides whether to commence the prosecution and conducts the proceedings.

The Board was asked by stakeholders to document in a policy the factors it considered in deciding whether to make a referral to Crown Counsel and the process by which the referral decision is made. The consultation package was developed in response to that request.