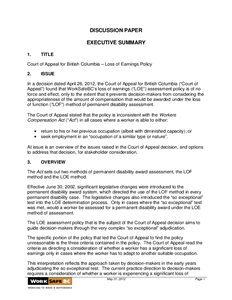 In a decision dated April 26, 2012, the Court of Appeal for British Columbia (“Court of Appeal”) found that policy item #40.00, Section 23(3) Assessment, Rehabilitation Services and Claims Manual, Volume II, was of no force and effect, only to the extent that it prevented decision-makers from considering the appropriateness of the amount of compensation that would be awarded under the loss of function method of permanent disability assessment.

The Court of Appeal stated that the policy was inconsistent with the Workers Compensation Act in all cases where a worker was able to either:

Given that the Court of Appeal declared that a portion of the policy had no force and effect, WorkSafeBC was required to proceed with an immediate review of the policy to address this decision.