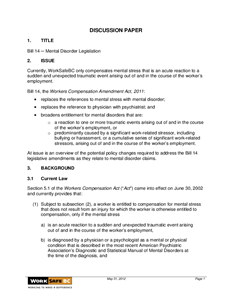 In order to implement these changes, WorkSafeBC had to bring its compensation policies in line with the new legislation. In this regard, the Policy and Regulation Division developed draft policies to address changes to compensation for mental disorders.

These legislative changes came into force on July 1, 2012.

Bill 14 also updated the dollar amounts in the Workers Compensation Act to reflect the 2012 Consumer Price Index adjustments as of January 1, 2012.  This was a housekeeping amendment and did not require policy change.