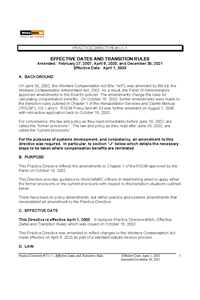 On June 30, 2002, the Workers Compensation Act (the “Act”), was amended by Bill 49, the Workers Compensation Amendment Act, 2002. As a result, the Panel of Administrators approved amendments to the Board's policies. The amendments change the rules for calculating compensation benefits. On October 16, 2002, further amendments were made to the transition rules outlined in Chapter 1 of the Rehabilitation Services and Claims Manual (“RSCM”), Vol. I and II. RSCM Policy item #1.03 was further amended on August 1, 2006 with retroactive application back to October 16, 2002.