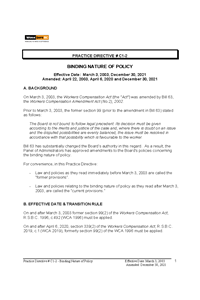 Prior to March 3, 2003, the former section 99 stated as follows:
The Board is not bound to follow legal precedent. Its decision must be given according to the merits and justice of the case and, where there is doubt on an issue and the disputed possibilities are evenly balanced, the issue must be resolved in accordance with that possibility which is favourable to the worker.

Bill 63 has substantially changed the Board’s authority in this regard. As a result, the Panel of Administrators has approved amendments to the Board's policies concerning the binding nature of policy.