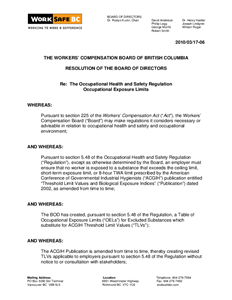 At their March 2010 meeting, the Board of Directors (“BOD”) approved a new occupational exposure limit (“OEL”) review and adoption procedure.

While the BOD approved the new procedure, they directed the Policy and Research Division to be explicit about the timelines for various stages in the new procedure. It will be important for stakeholders to take note of these timelines, especially those relating to the consultation phase. These timelines will be the same each year for the newly published ACGIH TLVs.

The new procedure is as follows: