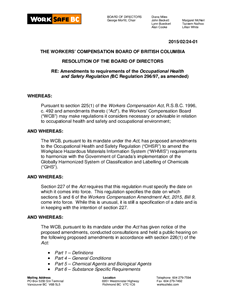 On February 24, 2015, WorkSafeBC's Board of Directors approved amendments to the Occupational Health and Safety Regulation.

These changes harmonize with the Government of Canada's implementation of the Globally Harmonized System of Classification and Labelling of Chemicals (GHS). The GHS does not replace WHMIS. The existing WHMIS requirements will align with the GHS elements and are now called WHMIS 2015.