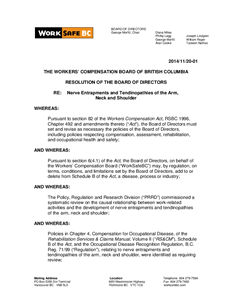 On November 20, 2014, the Board of Directors (BOD) approved amendments to policies relating to activity-related soft tissue disorders (ASTDs) in the Rehabilitation Services & Claims Manual, Volume II, and corresponding changes to the Occupational Disease Recognition Regulation and Schedule B of the Workers Compensation Act.

The amendments are to consolidate and clarify guidance on adjudication of ASTD claims generally, including:

The BOD approved these amendments after carefully considering feedback from stakeholders. The amendments coame into effect on March 1, 2015, and apply to all decisions made on or after March 1, 2015.