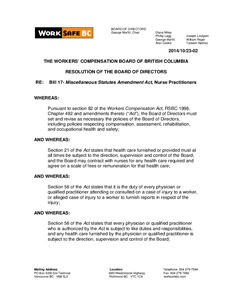 On May 29, 2014, Bill 17, Miscellaneous Statutes Amendment Act, 2014 received Royal Assent. This amended the Workers Compensation Act to include nurse practitioner in the current definition of a “qualified practitioner.” The changes were expected to take effect on January 1, 2015.

To reflect the Bill 17 amendments, the WorkSafeBC Board of Directors, at its October 23 meeting, approved revisions to three policies that were part of the recent Chapter 10 amendments. All of the new Chapter 10 policies became effective January 1, 2015.

Under the revised policies, nurse practitioners will be recognized as qualified practitioners to provide services to workers as authorized by the Health Professions Act and corresponding regulations and bylaws.

View the complete resolution for the Chapter 10 policies approved on March 19, 2014.