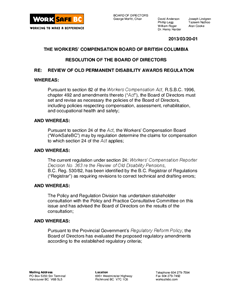 At its meeting on March 20, 2013, the Board of Directors (“BOD”) approved the repeal of the Workers’ Compensation Reporter Decision No. 363 re the Review of Old Disability Pensions, B.C. Reg. 530/82, and the creation of the Review of Old Permanent Disability Awards Regulation, B.C. Reg. 177/2013 along with consequential amendments to the policies pertaining to section 24 in Volumes I and II of the Rehabilitation Services & Claims Manual.

The revisions and amendments make no substantive changes to the regulation or policy, but were required at the direction of the B.C. Registrar of Regulations, because the regulation was no longer considered consistent with the current standards established by B.C.’s Chief Legislative Counsel for drafting a regulation, and also contained minor drafting errors.

The repeal and replacement of the regulations came into force on August 1, 2013, and the amendments to policy were also effective August 1, 2013 and apply to all decisions on or after that date.