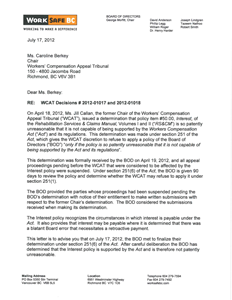 On July 17, 2012, the BOD considered two decisions from the Chair of the Workers’ Compensation Appeal Tribunal (“WCAT”) that the blatant Board error test in policy item #50.00, Interest, of the Rehabilitation Services & Claims Manual, Volumes I and II, is so patently unreasonable that it is not capable of being supported by the Workers Compensation Act (“Act”) and its regulations. This determination was made under section 251(3) of the Act.

The specific issue for the BOD to determine was whether the policy in question can be rationally supported by the Act.

The BOD made a decision on this issue at its July 17, 2012 meeting. You may examine the decision letter of the BOD to the Chair of the WCAT, advising that the BOD has determined that the policy is not patently unreasonable and that the WCAT must apply it.

The BOD also directed the PRD to commence a review of the interest policy.