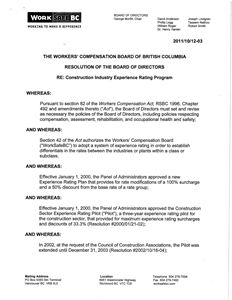 On January 1, 2000, the former Experience Rated (ER) Plan replaced the old Experience Rated Assessment (“ERA”) Plan that had discount and surcharge limits of 33.3%. Under the ER Plan introduced on January 1, 2000, a firm with lower than average claim costs may have received a discount of up to 50% off its base rate, while a firm with higher than average claim costs may pay a surcharge of up to 100% on top of its base assessment rate.

At its December 1999 meeting, the former Panel of Administrators approved an interim three-year ER Pilot Program for firms in the construction industry that capped the industry's discounts and surcharges at 33.3%. The Pilot Program was extended twice between 2002 and 2005. At its March 2005 meeting, the Board of Directors approved the Construction ER Program, limiting discounts and surcharges available to construction industry firms to 33.3%, effective January 1, 2006.

The Board of Directors also directed the Assessment Department to evaluate the effectiveness of the Construction ER Program, and report the results to the BOD by December 31, 2010. The evaluation was provided to the Board of Directors in December 2010 and the Policy and Research Division was subsequently directed to undertake stakeholder consultation on whether WorkSafeBC should continue the Construction ER Program, or conclude it and move construction industry firms into the ER Plan. Consultation occurred from February 25, 2011 until June 21, 2011.

On October 12, 2011, the Board of Directors of WorkSafeBC decided that the Construction ER Program will conclude on December 31, 2015 with its maximum discounts and surcharges progressively merged with the ER Plan over five years as set out below:

Effective January 1, 2016, employers in the Construction Sector are subject to all of the components of the ER Plan.
WorkSafeBC staff are currently working on the development of a Construction Transition Plan. The aim of the plan is to educate construction employers of the pending changes in their ER calculation and to offer assistance as these employers address any occupational health and safety and return to work challenges which may be contributing to the high surcharges