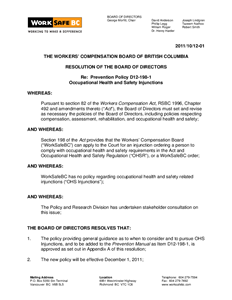 At their October 12, 2011 meeting, the Board of Directors approved the adoption of a new policy regarding occupational health and safety injunctions: Policy D12 198 1.

The policy provides guidance to WorkSafeBC on determining when to consider an injunction and the appropriateness of pursuing an injunction.
The proposed policy was released for public consultation from June 1 to September 16, 2011.
The policy was effective on December 1, 2011.