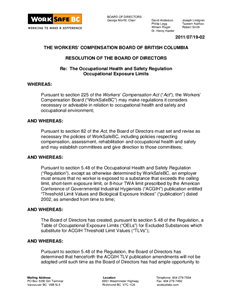 At the July 2011 meeting, the BOD provided their decision on the 2011 new and revised ACGIH TLVs for eight substances.
The BOD approved the adoption of the ACGIH TLVs as BC OELs for Acetic anhydride, Carbon black, Ethyl benzene, Methyl isopropyl ketone, Soapstone, and 4,4’-Thiobis(6-tert-butyl-m-cresol). Effective September 15, 2011, these six substances will be removed from the Table of OELs for Excluded Substances in Policy R5.48-1:

The BOD decided to maintain the following substances on the Table of OELs for Excluded Substances with no changes to their respective limits: