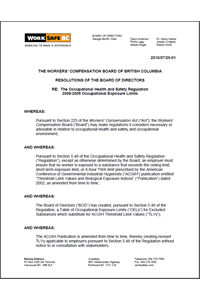 Each year, the American Conference of Governmental Industrial Hygienists (ACGIH) publishes a list of substances for which they have set new or revised Threshold Limit Values (TLVs). The ACGIH states that TLVs refer to airborne concentrations of chemical substances and represent conditions under which it is believed that nearly all workers may be repeatedly exposed, day after day, over a working lifetime, without adverse health effects.

Starting with the 2010 OELs, the Board of Directors approved a new occupational exposure limit review and adoption procedure whereby stakeholders will be consulted on potential implementation issues prior to the adoption of the annual new or revised ACGIH TLVs.

Board of Directors' Decision:

At the July 2010 meeting, the Board of Directors provided their decision on the 2008 and 2009 Occupational Exposure Limits after reviewing the results of the stakeholder consultation feedback and the internal review of the feasibility of implementation.

The 2008 and 2009 adopted OELs for substances without implementation issues are retained for aluminum metal and insoluble compounds, benomyl, ethanol, ferbam, rubber solvent and VM&P naptha.

For the other substances, the results of the stakeholder consultation and the internal review identified that there were no validated air sampling methods or sampling devices to measure at the new or revised TLVs. For sulfur dioxide, there were sampling issues as well as practicability of implementation issues.

After considering these issues, the Board of Directors decided to reinstate the former exposure limits that were in place prior to the revision by ACGIH until the implementation issues can be resolved for these substances.

Pursuant to Section 5.48 of the Regulation, the BOD determined that the new or revised 2008 and 2009 ACGIH TLVs listed below (reflected in the 2010 ACGIH publication) would not continue as BC OELs but rather the substances will be placed on the Table of OELs for Excluded Substances in Prevention Policy R5.48-1 and the OELs applicable to the substances will be indicated in that Table:
Butenes, all isomers
Carbaryl
Indene
Iodine
Iodides
Natural rubber latex
1,1,1,2 – Tetrachloro-2,2-difluoroethane
Thiram
Trimellitic anhydride
Beryllium and compounds
Dibutyl phosphate
Diethanoloamine
Endosulfan
Ethyleneimine
Methyl parathion
Propyleneimine
Sulfur dioxide
Sulprofos

The amendments became effective on September 1, 2010.