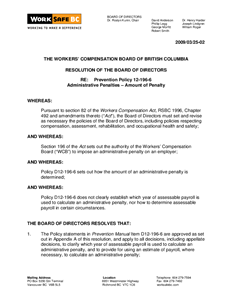 In February 2009, in two separate decisions, a Vice Chair of the Workers’ Compensation Appeal Tribunal ("WCAT") determined that part of the prevention policy on administrative penalties was patently unreasonable. By way of background, the primary factors used to calculate the amount of an administrative penalty in Policy D12‑196‑6 are the nature of the violation, the compliance history of the employer, and the assessable payroll of the employer. The WCAT Vice Chair's decisions focused on the year of assessable payroll that is used for calculating the amount of a penalty. The policy said the penalty is based on the assessable payroll for the most recent full year at the time the penalty is imposed.

The Policy and Research Division has the Board of Directors’ authority to bring issues forward to them where amending the language of a policy will ensure there is clarity in the application of the policy.

The intent of the policy is to base an administrative penalty on factors that are relevant at the time of the incident or violation in order to motivate employers to comply. If an administrative penalty is imposed reasonably close to the event giving rise to the penalty, the intent of the policy is achieved. However, when there is a significant time gap between the incident giving rise to an officer's decision that the penalty is warranted and the date the penalty is imposed, an anomaly can occur. Lengthier periods of time in the application of the penalty can be caused, for example, by the complexity of the investigation and the assessment of evidence, the number of witnesses to be interviewed, and the accessibility of witnesses. If the employer’s payroll has changed significantly during a lengthy investigation, the amount of the penalty can also change, based on this later change in payroll.

In order for the policy to achieve its intended result in all circumstances, it has been amended to clarify that the relevant payroll for calculating an administrative penalty is the employer’s assessable payroll for the year immediately preceding the year in which the incident giving rise to the penalty occurred. This change was made to eliminate the potential anomaly. WorkSafeBC does not agree that the former policy was patently unreasonable.

Aside from the issue raised in the WCAT Vice Chair's decisions, there are some situations where it is necessary for WorkSafeBC to estimate an employer’s assessable payroll for the previous year in order to calculate a penalty. The former policy did not make any provision for this circumstance and it has been amended to provide for using an estimate of assessable payroll where necessary.