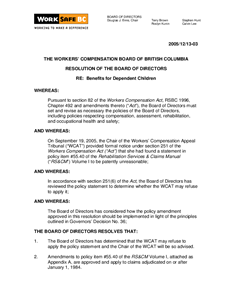 At its meeting on December 13, 2005, the Board of Directors considered a decision of the Chair of the Workers’ Compensation Appeal Tribunal ("WCAT") that a statement in policy item #55.40 of the Rehabilitation Services & Claims Manual, Volume I, is so patently unreasonable that it is not capable of being supported by the Workers Compensation Act ("Act") and its regulations.

The policy statement in question provides that where there is no surviving spouse eligible to claim compensation, benefits for dependent children who were not living with the worker at the date of the worker’s death are determined under section 17(9) of the Act.

The specific issue for the Board of Directors to determine was whether the policy in question can be rationally supported by the Act. To assist in answering this question, the Board of Directors sought advice from its General Counsel, the Policy and Research Division and from an independent and external Legal Counsel. The parties to the WCAT appeal were also invited to make submissions on this issue; however, no submissions were received.