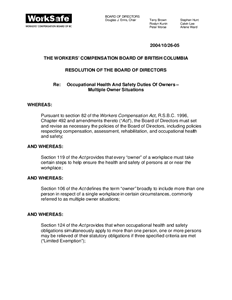 At its meeting on October 26, 2004, the Board of Directors approved amendments to policies in the Prevention Manual dealing with the responsibilities and accountability of owners in multiple owner situations. The key changes include:

The policy amendments took effect on December 1, 2004 and apply to all situations in which an owner has responsibilities under section 119 of the Act on or after December 1, 2004.