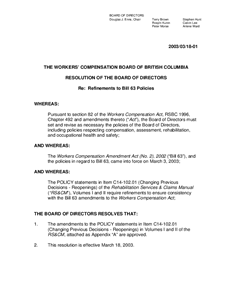 At its December meeting, the former Panel of Administrators approved substantive policies to implement the Workers Compensation Amendment Act (No. 2), 2002. It was subsequently noted that further refinements were required to the policy in Item C14-102.01 (Changing Previous Board Decisions - Reopenings) to make the language in the policy more consistent with the language in the legislation.

The Board of Directors approved two sets of refinements to the reopening policy. The first incorporates the language in section 96(3) of the Workers Compensation Act, which authorizes the WCB to vary a previous decision upon reopening. (The former policy language might have suggested that a decision may only be reopened to pay further benefits.) The second incorporates the language in sections 96.2(2)(g) and 240(2). As a result of these provisions, a WCB decision to reopen or not to reopen a matter on application is appealable directly to the Workers' Compensation Appeal Tribunal and is not reviewable by the WCB Review Division.