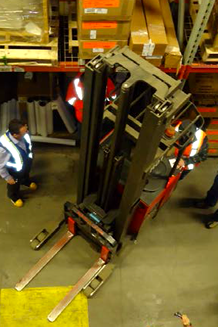 Incident summary
A warehouse worker sustained fatal injuries while operating a long-reach forklift. The worker was returning the forklift to a recharging area. After turning down the aisle towards the charging station, he inadvertently veered to the left and into a vertical column of the storage racking. The worker sustained crushing injuries after being pinched between the forklift and the column.