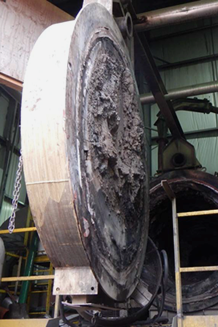 During maintenance shutdown at a wood pellet plant, three workers employed by a mill machinery service company were working at the mill to clean the burner. The workers were standing at the opening of a burner door when an explosion occurred in the dryer system. The three workers were knocked backward by the force of the explosion and suffered burn injuries.