Richmond, B.C. — WorkSafeBC is raising concerns about an increase in hearing loss among workers in the oil and gas drilling sector and is alerting employers and workers with a new safety bulletin. 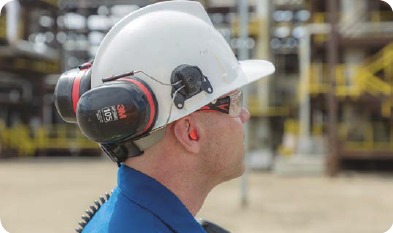 Hearing-test data collected by employers in the oil and gas drilling sector over five years indicates the percentage of workers showing signs of noise-induced hearing loss (NIHL) has increased by 12 percent, from 33 percent in 2012 to 45 percent in 2017. By comparison, 13 percent of workers in all other noisy industries tested positive for NIHL in 2017.

“There are a number of reasons why workers may be diagnosed with noise-induced hearing loss even though they are wearing some form of hearing protection,” says Sasha Brown, WorkSafeBC occupational audiologist. “The earplugs or earmuffs might be the wrong size, inserted or worn incorrectly, not worn for long enough, or they may not be providing enough protection for the duration and intensity of noise exposure.”

Hazardous noise levels are defined as 85 decibels in the A scale for eight hours or the equivalent; the A scale is used for measuring environmental noise. All workers are responsible for wearing appropriate hearing protection and taking part in their employer’s hearing-loss prevention program. Since 2006 there have been more than 41,000 accepted claims for NIHL in B.C.

Along with the new safety bulletin, WorkSafeBC has additional online resources to assist in understanding and preventing noise-induced hearing loss, including: Hearing protection is a sound idea; Sound Advice: A Guide to Hearing Loss Prevention Programs; and The Hearing Video.

Media contact for more information or to arrange for an interview: