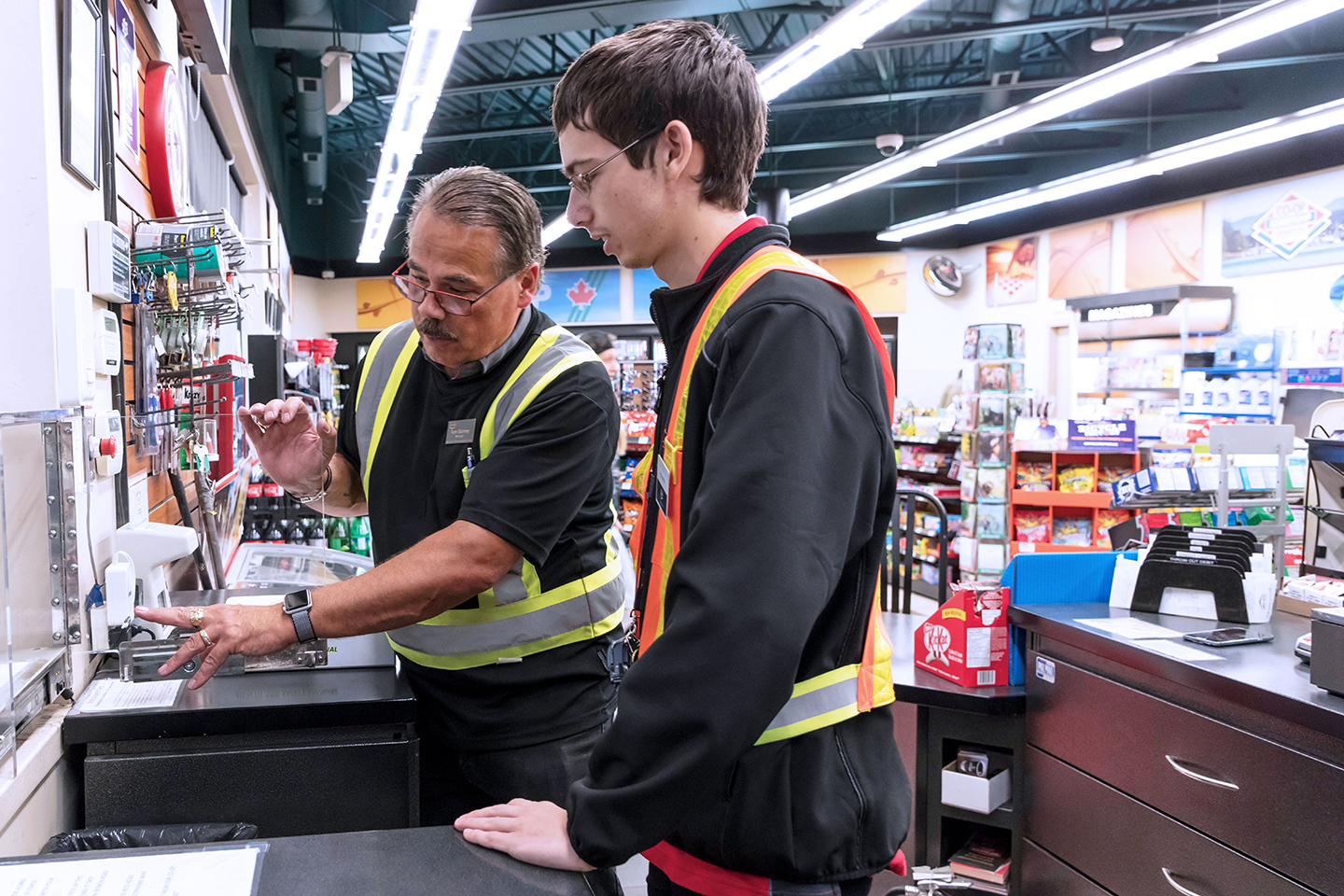 Retaining long-term night staff is no issue for Mid-Island Co-op in Nanaimo, B.C. Their working-alone policies are helping to keep their workers healthy and happy on the job.

It’s 3 a.m. While most people are in bed, a lone gas‑station attendant is awake to serve the odd car pulling in for gas or snacks.

As an employer, you might think that this late-night shift would be hard to fill. Not at the Cranberry Road location of Mid-Island Co-op. Working alone late at night comes with an extra set of hazards, including the risk of confrontation or violence. But because this station has put many safety measures in place, they’ve had regular night-shift employees for years.

“Retaining long-term staff isn’t an issue for us,” says Ron Gurney, operator of the gas bar. “I have people who specifically want to work nights alone for me. They appreciate that we have a system in place, and they feel, as much as anybody can, that they are safe.”

To mitigate the hazards of working alone, late-night retail businesses must follow regulations, which include a 2012 amendment to address violence‑prevention measures. We recently conducted a late-night retail inspection initiative to find out how businesses, such as this one, were implementing these safety measures.

Alex Bayati was the occupational safety officer who inspected this location of Mid-Island Co-op. Some of the required measures Bayati was looking for included good visibility and lighting inside and outside the premises, limited access to the inside of the premises, video surveillance, signage telling customers about limited amounts of cash on the premises, and a system requiring customers to pre-pay for their fuel.

Bayati was impressed by the co-op’s safety measures. “The safety of the workers was obviously a big concern for the employer at this location,” says Bayati.

In late-night retail specifically, employers must eliminate or reduce hazards by having a physical barrier separating the employee from the public, having more than one worker on shift, or deciding not to stay open late at night (from 11 p.m.–6 a.m.). Instead of, or in addition to these measures, businesses can also choose to implement a Violence Prevention Program.

Violence-prevention measures include precautions such as keeping cash handling away from entrances, keeping small amounts of cash on hand, putting bills in a drop box, having counter safes fitted with time-delay locks, and using one register, with the till left open on other empty registers.

“Retaining long-term staff isn’t an issue for us.”

—Ron Gurney, operator of the Cranberry location of Mid-Island Co-op

Regular check-ins on the well-being of lone workers, whether at risk of violence or not, are also essential. Visually checking on employees is best, but timed interval procedures such as phone calls, or workers from nearby businesses checking on each other, can also be an option.

At Mid-Island Co-op, lone attendants must also wear a personal emergency transmitter to automatically alert a service provider to an emergency. “Every hour they are polled by security, and they have to press a button in response,” says Gurney of his lone workers. “It’s easy for them to press the button in case of an emergency too.”

Safety procedures must also be clearly written down for employees. After the late-night retail inspection, the gas bar developed written procedures for both money handling and checking-in on the well-being of lone workers.

“They put in time and effort to amend their written procedures,” Bayati says. “The employer representatives’ interaction with us was outstanding.”

Other violence‑prevention measures include personal skills training, such as learning to greet customers and give eye contact. “If you’re sitting with your head down, and don’t engage, you are far more likely to be targeted,” explains Gerard Hunter, Mid-Island Co-op HSE and ASSET protection manager. “Creating a micro-relationship can deter violent behaviour.”

Mid-Island is constantly reminding its employees about the importance of safety. “To avoid employee complacency, we build upon their initial orientation with bulletins, or address incidents at other locations,” explains Hunter. In addition, violence prevention can be useful for employees who work with a partner, but at times, find themselves alone. To ensure ongoing safety, employers are also required to do a third-party security audit every two years.

“We do a lot of little things to make things safer,” says Gurney. For instance, they give their night-shift workers extra responsibilities such as paperwork, which helps, keep them awake, alert, and engaged on the job.

Gurney insists, however, that it isn’t difficult to implement these or other safety measures. “We’re always looking for ways to do things better,” he says. “We’ve had help from WorkSafeBC to tweak a few things. We really appreciate that because, in the end, it means we do a better job.”

“To avoid employee complacency, we build upon their initial orientation.”

Working in isolation affects a wide range of industries

Employees in many industries beyond retail face increased risks from working alone or in isolation, including taxi drivers, truck and delivery drivers, by-law officers and security guards, night cleaners and custodians, warehouse workers in cold rooms or freezers, night-shift employees, and home care and social service employees. In addition to a risk of confrontation, lone workers are more vulnerable if they are injured or fall ill while on the job.

“For example, a health care worker going into someone’s home is alone, has to deal with pets, with family, and many things that can catch them off-guard or cause an injury,” says Brenda Matsalla, Prevention Field Services supervisor.

All employers who have employees working alone, whether in retail or not, must identify hazards and take steps to eliminate or minimize them, says Matsalla. This can be something as simple as scheduling more hazardous work during times when more than one worker is present.

To get a complete picture of the potential hazards for lone workers, employers must complete a workplace risk assessment by looking over the premises, considering previous accidents or incidents, and talking to employees about current problems, concerns, and possible solutions.

Do you have employees who are assigned to work alone or in isolation?

If the answer is “yes,” you must do the following: